WTC NORFOLK INFORMATION TO BE ULPOADED.

Norfolk is located at the core of the Hampton Roads metropolitan area, bordered by the Elizabeth River and Chesapeake Bay. The city has a long history as a strategic military and transportation point. The largest Navy base in the world, Naval Station Norfolk, is located in Norfolk along with one of NATO's two Strategic Command headquarters. The city houses Norfolk Southern Railway, and Maersk Line, Limited, who manages the world's largest fleet of US-flag vessels. The region plays an important role in defense contracting, with particular emphasis in the shipbuilding and ship repair. The second largest industry are the region's cargo ports.

“This article uses material from the Wikipedia article "Norfolk, VA", which is released under the Creative Commons Attribution-Share-Alike License 3.0. (http://creativecommons.org/licenses/by-sa/3.0/)”.

of cargo is transported by rail

Thank you for your interest in WTC Norfolk! For general questions and comments please complete the form below and a member of our team will reach out to you shortly. We look forward to hearing from you. 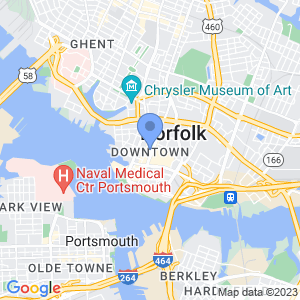